While surviving in day-to-day life we all are surrounded by various particles, Waves, rays, radiations which we can not see by the naked eyes. Infra-Red is one of the radiations available in the surrounding which continuously emits from the Sun.

Here we will learn some basics of Infra-red spectrophotometry and that contains:

In the 17th century, the great scientist Mr.William Herschel (1738-1822) has started the study of light generated from stars. In his experiment, Mr. William used different color filters in his telescope to study light.
In his study hi found that rays are passed from the different color has different light intensity and according to intensity, filters are warmed.
He experience that red color light is warmer than the other colors. He started to investigate the temperatures of different color and why the red color is warmer than other colors.
William knows that sun rays are a mixture of different colors and decided to use a prism (a glass which can separate the mixtures of Sunrays) in his experiment for separation of colors.
When sun rays passed through the Prism it absorbs sun rays and separates in different colors. Hi kept a thermometer in front of every color and measure every color temperature. Mr.William observed that the violet color is the coolest color than the other and red is the hottest in all.
Furthermore hi observed that the color towards red is in increasing order. (Sunrays mixture of colors: Violet->Indigo->Blue->Green->Yellow->Orange->Red).
Accidentally after red color, one more thermometer was there outside of this sunrays mixture (besides red color). Surprisingly hi observed that the thermometer which is kept outside is more honest than red. He concluded that some invisible light exists outside the mixture. The invisible light exists outside the mixture of color hi called these rays as a “Calorific Rays.”
Today we called these calorific rays as infra-red.
Here you can see the experiment of Herschel to measure the temperature of different colors through a thermometer. 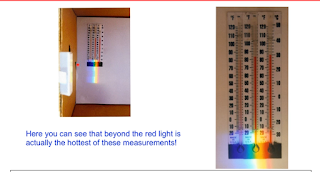 The Infrared spectroscopy is a vibrational energy level changes when radiation passes through the material.

Visible light-> The light which we can see. eg Rainbow.

4. What is IR spectroscopy:

There are two major types of vibrations :

stretching vibration is nothing but the vibration changes in bond length. Or variation in bond distance cause due to vibration.

In symmetric vibration, two or more bonds are vibrated in or out together. This means both the molecules come towards the central atom and go away together from the central atom in the same direction. As shown below image.

In asymmetric vibration one bond is vibrated shorten and the other is longer. Means one molecule comes towards the central atom while the other is go away from a central atom in the same direction. As shown in the image.

It is a variation in the angle of bond cause due to vibration.
There are four types of bending vibration:
i. Scissoring, ii. Wagging, iii Rocking, iv.Twisting
Scissoring and rocking are in a plane vibration and wagging and twisting are out of plane vibration.

This is also a plane vibration. In this vibration both the molecule are on equal distance from atom and both are swing in a plane direction and back in same direction. Here in image you can see.

This is out of plane vibration. In this vibration both the molecule will be on same distance from atom but both will move together out of plane from the atom. As shown in the image.

This is also out of plane vibration. In this vibration, molecules are moving out of a plane from atom but not in together. Refer to the below-shown images.

Does Infrared have color?

The infrared is out of visible spectromagnetic range, it does not having any colour but by applying certain artificial condition it can be visible.

The TV remote is the best day to day life example. Press any button of remote and hold the mobile camera in front of the TV remote light. Impression can be seen on the mobile display. Here is an image of infrared.

i. Functional group region identifies individual peak and it is easy to identify the peak in this region. ( Equal or greater than 1500 cm-1)

ii. Fingerprint region is having multiple peaks so it is complicated to identify peaks in this region. ( Less than 1500cm-1)

Calculation of wavelength or wavenumber:

The calculation of wavelength or wavenumber can be done by this equation.

Wave number is inversely proportional to the wavelength.

wavenumber can calculate if the wavelength is known.
And the unit of measurement is cm-1.

Why KBr is used in IR and not water?

In IR spectroscopy KBr does not show any peaks and the dipole moment of KBr is Zero in this region, due to this reason KBr is used as a reference.

6. Is IR radiation are harmful:

Yes, IR radiation is harmful to a human being if continuously come in contact with skin. It damages to tissues and may cause skin cancer. It impacts on eye lens or cornea.

7. Difference between IR and FTIR:

What is Constructive interference?
The FTIR is having two mirrors one is fixed and the other is a moving mirror. Both the mirrors on equal path distance. When infrared light hits the beam splitter, the splitter splits the rays. some rays are transferred towards fix mirror and some reflect towards moving mirrors and when rays come back from mirrors to beam splitter they make the same path difference with equal time and forms constructive interference.

What is destructive interference?